#LetPompeyBreathe had another successful action day on the 4th April with a gathering in Guildhall Square, and a public meeting at the Southsea Village Pub later in same the day. Portsmouth Green Party joined with Portsmouth Friends of the Earth and Keith Taylor MEP to call for Portsmouth City Council to tackle the illegal pollution levels in the city. The heath burden was symbolised by a cluster of head stones pointing out the approximately 100 early deaths linked to air pollution per year in the city, and the cause of death: “inaction”. Leaflets were distributed by volunteers to the public, who in many cases were completely unaware of the danger they were routinely exposed to by NO2 and particulate pollution.

The evening meeting was well attended with a panel comprising: Rachel Hudson, Portsmouth Friends of the Earth, Rob Bailey, Milton Neighbourhood Forum, and Keith Taylor MEP. Several people spoke out about their local concerns, including schools being next to busy polluted roads. Measures to tackle pollution were discussed, including improving bus services, a Healthy Streets policy for urban planning, improved monitoring around the city, ensuring new developments are sustainable including in terms of traffic pollution, and pushing for a car free day in the city centre. Keith launched his Polluted Cities Hampshire report, which outlines the situation in Portsmouth, Reading and Winchester.

“There is an overwhelming demand from residents for action on air pollution in Portsmouth. The graveyard protest is a macabre but vital reminder that green campaigners won’t let the Council sit idly by while the people of Pompey choke.”

Rachel Hudson, from Portsmouth Friends of the Earth, added:

“It shouldn’t be an aspiration to have clean, fresh air for everyone, everywhere in our city – it is our right. We’ve been monitoring air pollution levels using our own diffusion tubes and we want to ensure community input is listened to by those who can make a difference. With people’s health being at risk, adequate public transport, walking and cycling infrastructure are urgently needed.”

#LetPompeyBreathe is also launching a petition to call for action by Portsmouth City Council to address pollution. 1000 signatures will have the petition debated by the full council. (Watch this space for when it is ready and live!) 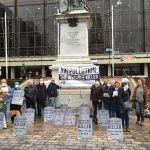 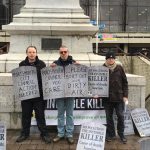 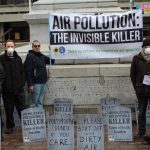 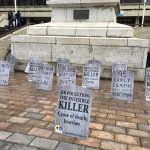 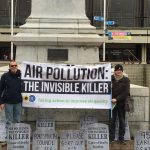 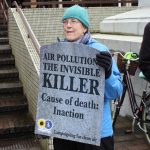 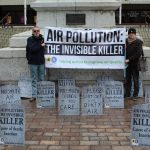 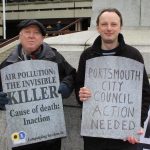 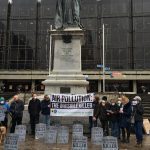 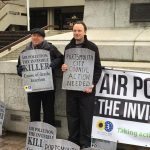