The latest (draft) air quality figures for Portsmouth have just been published. I’ve updated my CAPIT map tool with the new figures.

My first impression is that sites with long term readings are about the same as 2017, for example London Road remains about the same. Known problem areas of Queens Road, St Michael’s gyratory and the bottom of M275 are back out of compliance. However, the expanding monitoring introduced recently have picked up several new locations that are out of compliance (above 40ug/m3). This includes Albert Road, Market Way (behind Cascades) and Fratton Bridge. The busy road by the Catholic Cathedral has a very high NO2 level of 50ug/m3. Areas barely within compliance including the top of Milton Market, the junction at the bottom of Velder Avenue, Cosham (Northern Road & Tudor Crescent) and Port Solent.

Big news: we have around 1200 signatures for our air quality petition. We should be able to hand in what we have so far to the city council on Clear Air Day (21st June).

News about air quality is arriving thick and fast! It’s hard to keep up some times. However, this post is going to focus on what has claimed to be news, but actually isn’t. The latest NO2 levels have been published in draft form. This has lead to reporting in The News saying:

…in the past 12 months there have been significant improvements recorded, with two-thirds of the island’s 28 monitor stations showing cleaner air compared to 11 per cent the year before.

The errors in this statement are many but subtle. The first thing to remember is that pollution levels not only depend on emission of pollution, but also on weather patterns. Each year the wind blows in different directions for varying amounts. This makes the entire regions pollution levels increase or decrease in a broadly similar way. This becomes clear if we look at the average city wide NO2 levels for the last 6 years:

While each year the level changes, the levels have actually stayed around 32μg/m3 throughout. While the 2017 level is slightly below, this is not outside of the typical natural variation due to weather. The emission levels could be thought of as a “signal” while the effect of weather could be considered as “noise”. Although it is certainly possible that emission levels have changed, the change is within the range caused by natural weather fluctuations. This means we can’t say if the slight reduction seen in 2017 is due to weather or emissions. While we welcome favourable weather, this is not a long term solution and does not make enough of a difference.

Another problem is reporting that “two-thirds of the island’s 28 monitor stations showing cleaner air”. Since all the monitoring stations are subjected to the same weather, and that weather effects have a similar or greater effect than changes to emissions, we would expect most monitoring stations to show a change in the same direction from year to year. The exact proportion tells us almost nothing about the air quality situation in Portsmouth.

Similarly, if an NO2 reading is particularly high in one year (as it was in 2016, and subject to noise like weather effects), we would expect a lower value the following year (which it was in 2017). (This might be a form of regression toward the mean but I’m still trying to understand the concept.) The only way around this, apart from somehow accounting for the effect of weather, is to wait for additional data in subsequent years.

On the other hand, some individual sites show large changes. I am hesitant to call the changes significant until further analysis has been conducted, except when the pattern is in the opposite direction to most other monitoring stations. This does hint at a worsening situation in London Road, unfortunately. 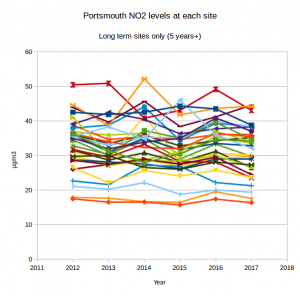 This again shows a broadly constant level of pollution, with a handful of large changes in at a few sites. Here is the same data shown on an interactive graph that we named the CAPIT tool:

This clearly shows The News is wrong to claim “The only area to still be below par is the London Road corridor, in North End”. The pollution is also above the legal limit near the Catholic Cathedral (site 116).

In other news, the latest report reveals the City Council has added new NO2 monitoring tubes to many new locations: 16 in 2017 and 59 in 2018, up from 28 sites in previous years. This is very welcome as it allows Portsmouth City Council and the public to see the scale of the problem. The 2018 additions were due to DEFRA commenting on the 2017 air quality report. (Thanks DEFRA!)

The report mentions £245k being spent on an “East-West Active Travel Corridor”, which sounds promising.

This is fairly obvious to anyone who has tried parking in Portsmouth. It is another symptom of Portsmouth’s over reliance on private car transport. In terms of encouraging sustainable transport:

The two main ways that bus use could be encouraged among respondents is ‘lower travel costs’ and ‘more frequent/reliable sources’ with 52% and 48% of respondents respectively.

It seems a shame this were not sufficiently prioritized in the City Centre Road scheme.